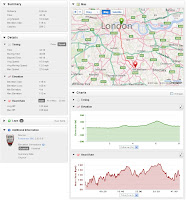 Last night was my first outing on the bike for a number of years and it was quite jolly!
Ok it was utterly freezing, and at one point dancing up the North face of the Eiger that is the Norwood Ridge I thought my lungs were going to burst, but it was nice to realise that my bike handling has not gone completely to seed, managing a brakes-feathered but still fairly exciting 27.6mph on the descent.
In preparation for re-joining the daily London remake of Mad Max, I invested in a Muvi micro camera which for someone brought up on BBC Micros and Acorn Electrons is as near to witchcraft as I am likely to get that does not involve a windmill and burning torches.
Mounted on the handlebars it is a little juddery from the road noise, which was forewarned in an article by The Londoncyclist but even so, the thing is the size of an oven chip and surprisingly good.
So as a little Thursday magic, here's my ride home, well from Herne Hill anyway
(mobile users click here):

WARNING: It's a bit strobe-lighty, so anyone disliking that sort of thing may want to have a cup of tea instead
Featuring: '24 Hours To Tulse Hill' By the South London Royalty who are Carter USM