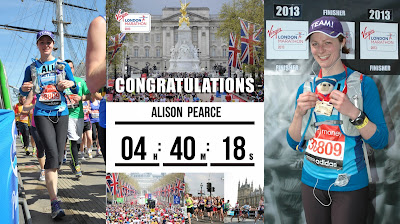 A week ago today Iain and I were pacing around the living room, alternately dashing off somewhere to obtain the 'essential' race item we'd just remembered to lay out in our neat, Marathon Stuff display. Both of us had cold, sweaty palms and burning brows - I've not felt nerves quite like it since my A-Level French speaking exam! Day-long email correspondence with the rest of TEAM! confirmed we weren't alone in our adrenaline-fuelled over-preparation, but that didn't help us get any sleep on Marathon Eve either: the alarm was set for 6.30am on Sunday and we were up and about well before then.

Making our way to the Red Start from Greenwich station I was starting to regret my choice of long-sleeves as, with little wind about and sunny clear skies, it was surprisingly warm though once we'd stowed our kit bags, met some of TEAM! and queued for that last-minute panic wee, I had to stick with it. The silence to remember the victims of Boston was one of the most astounding things I've ever experienced. Although we watched the marathon footage on tv when we got home, the noisy hubbub of 30,000 people anxiously gathered on the start line disappearing immediately on the sound of one whistle such that you could have heard a pin drop on such a still day, was something that couldn't be conveyed in the footage. I felt united with the global community of marathon runners at that moment - it was quite unforgettable. 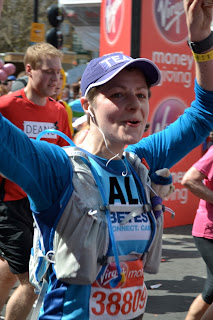 Some start-line faffing with my Camelbak tube not delivering water and panicking that my Garmin watch wasn't detecting satellites melted away when Teddy and I started across the line and on our way. Those first 12 miles were dare I say it, enjoyable! I kept to my planned pace and merrily checked my mileage times off on my pace wristband and all was going swimmingly (runningly). There were so many people out supporting us with music systems and bands by the side of the road that my ipod music (especially with rubbish Apple headphones) was but a whisper in my ears. I kept them in though just in case the action of unplugging somehow scuppered my race - sad but true, such is the level of paranoia which develops in relation to a marathon! I spotted Mum just before Tower Bridge waving a purple TEAM! flag and then gave my most enthusiastic whooping and waving to the Diabetes UK (DUK) cheering squad and our friends Toby, Rachel and Emma before the iconic river crossing and before I knew it we'd made halfway point. So far so good. By far one of the hardest things to see up to and at that point is the field of runners heading in the other direction who'd already done 22 miles and all of Canary Wharf and the Isle of Dogs. I silently cursed them.

The second half of the race was where things started to deteriorate. The roads really narrow down and given I was aiming for the popular 4.5 hours, I was running in the most congested part of the field. In between the sheer numbers of people, the crowds encroaching on the roads and the runners starting to walk, I became frustrated trying to get past other runners and weaving in and out and on the pavement. It was feeling hotter, I started losing time mile by mile and upon reaching Canary Wharf at mile 18, I was at quite a low ebb and running slower and slower (despite my parent's friend Wayne on seeing me there apparently turning to Dad and saying I looked really good - I must have hid it well!). It was around this point I found myself not wanting to eat or drink, feeling a bit shivery and nauseous, not really sweating and a horrible image flashed through my head that my finish might be with St John's Ambulance rather than on The Mall. I grabbed one of the Lucozade drinks and kept it with me from that point on, taking a few sips every now and then though I couldn't stomach my last Go Go Gu. I must have just nipped that developing heat exhaustion before it took over as I managed to grit my teeth and carry on despite the waves of nausea, making use of the roadside cold showers (covering Teddy with my hat as I went under). I had tried not to think too hard about why I was running the marathon at all up to that point as I knew it was going to be a huge emotional experience but I allowed Emily in at mile 20 and I knew there was no way I could stop running. I wouldn't permit so much as a limp - there was to be no walking, I was going to run all the way. On reaching mile 21 I knew I could do it, whatever happened I could jog five miles. Exiting the road tunnel on the Victoria Embankment I convinced myself that I had a long way to go to reach Big Ben and that mental trick plus seeing our neighbours Andy and Paul just before 25 buoyed me to that longed-for Westminster right-hand turn and the second DUK cheering brigade. In the photos of me at that point, despite exercising hard in the sunshine for over four hours, I'm looking distinctly pale but at least I'm smiling! 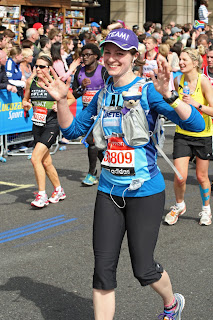 And then it was done - Teddy jumped out of his pocket, as planned, to beat me to the line and it was all over and done with a few tears in 4 hours 40 minutes. I'd lost 10 minutes off my planned finish time but I'm so pleased that my second (and oh so definitely last) marathon knocked 1 hour 12 minutes off my previous best time!

Iain met me at Horseguards and after a few weepy hugs (me not him) we made our way to the conference centre where DUK had their Cool Down Party. We got a little cheer when we walked in which was superb and immediately signed up for a much-needed leg massage.
Elliot, Jamie, Mark, Darren and Adam were already there having given superb performances and I was so overwhelmed at the friends and family filling the room having been out on the course cheering us on - thank you all so very much. Jamie had even calmed (?) his pre-marathon nerves by baking us all a spectacular TEAM! cake at 1 AM. The next hours were a blur of chatting, hugging, photos a DUK post-marathon interview and welcoming TEAM! members as they arrived. Finally Jamie, Darren, Iain and I were the last to leave and kicked out by the cleaners at 7pm to make our ways home, trying not to get run over crossing the roads as any movement over a shuffle was impossible. Thanks to the extremely lovely DUK staff especially, Lou, Joe and Britt for your support, encouragement, fab Cool Down Party and for being awesome individuals.

Despite the leg pain that lasted until Wednesday it all seems quite surreal that it's over and in some ways that it ever happened. 32 weeks of training and an emotional journey has been condensed into a lump of metal on a red ribbon. As I've mentioned before, the journey has almost been more important than the achievement for me: the training schedule and targets kept my head above water when I wanted to give up and wallow and I've been fortunate to have met some of the people in Emily's world who I'd very much like to remain in mine. The members of TEAM! are all total legends for committing themselves to this journey and to have done it with such good humour, tenacity and, well, love, I feel exceptionally lucky to have been part of it. We have raised (and still counting) an amazing sum for Diabetes UK, we did ourselves proud and we honoured Emily in the best way we could. She would have been so, so proud. 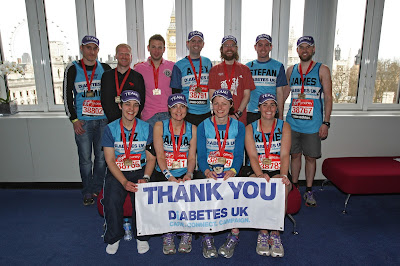