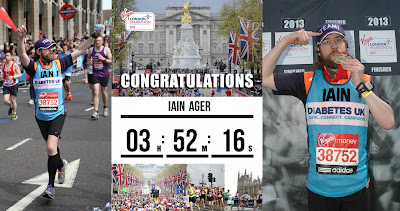 And so, after 6 months training, 95.5 hours on the road and 658.03 miles, it was marathon day, yet even with all the preparation - and with two London marathons already under my racing belt - I had no idea that the three days leading up to the race would present a far more challenging feat of mental endurance than the big day itself.

Initially, I had managed to keep my mind calm, but by Thursday lunchtime I was well on the way to becoming a nervous wreck. By Saturday, my body had been replaced with a mishmash of uncoordinated limbs, badly held together with buzzing wires and fuelled by pure adrenaline. I had developed numerous aches and foreboding symptoms, every one of which heralded a run-stopping disease. Saturday itself was filled with extraordinary displays of OCD behaviour - laying out kit, neatly, in rows, making lists, making new lists, creating playlists, editing playlists, moving something from the geometric kit display and then putting it back. On Saturday night, I managed about an hour of sleep.

This race, the preparation, the reasons for it were so important to me that I have truly never felt so wretched for so long and it will therefore come as no surprise that as I stood in pen 5 of the Red Start on Sunday morning, with nothing wrong with me whatsoever, the most salient emotion was utter relief, with extreme excitement running a very close second.
Before the Mass Race got under way, there were 30 seconds of silence in memory of the victims of Boston. You have no doubt seen pictures of the mass starts - there are an extremely large number of people involved and you could have heard a pin drop; it was extraordinary and extremely moving. After the applause, with the claxon echoing across the starts, the race was very much on.

Putting an unfortunate kibosh on a exciting reportage, there is not much to say about the race itself. As usual with London, I was completely nobbled by the volume of runners, and try as I might to find space, over the full distance the congestion cost me between 5-10 seconds per mile. However, that said, I followed my race strategy to the letter: my pacing was excellent, I smashed my goal of sub-4, producing my first positive marathon split (halves of 01:57:07 and 01:55:09), and I finished with enough strength over the last 7km, that I passed a further 1451 runners with just 15 passing me. I finished hydrated, I was focused and in control for the whole course, I did not end up in the company of St. John's Ambulance and for these things I am very proud of myself.

That said, there was one whoopsy which is funny in retrospect, but not quite so funny at the time. As I crossed the finishing line, I stopped my watch which read 03:49:47. I was delighted as I thought I had recovered a chunk of the time I had lost to the congestion, but unfortunately, I had actually completed the course 2 minutes slower. It transpires that while running through the tunnels in Canary Wharf and along the Embankment, my watch - losing GPS signal - decided that I was standing still and activated the auto-pause. Arse. Note to self: turn off auto-pause for a race.
Time compresses when you are so focused, and for me the day went by in a blink. I can remember most of the course and I certainly remember the finishing line, but even at this monumental point, thanks to a highly conscious effort to prevent my collapse in to a weeping heap, I simply felt numb. As  a result, my abiding memory of the day comes courtesy of the endless and legendary crowds who were utterly cacophonous and to the absolute heroes who came to cheer us on, and to Diabetes UK who were tremendous hosts a most sincere THANK YOU!

Since the race, I have not been running and on Tuesday I was even off walking after some jester removed my quads and replaced them with lactic-jello, but I will be back on the streets next week slowly building the training back up for my next race - a 10k this time - in 14 weeks. See, if you are not careful, this is what happens and in spite of myself, I will probably run another marathon. What is wrong with me? 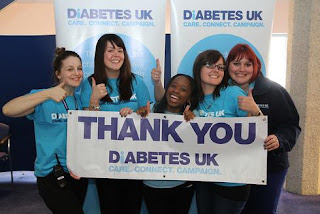