This week I have been mostly training in wintery scenes with yesterday's 17-mile long run taking me to the brink of tears as I feebly knocked on our front door for Iain to let me in. It was quite astounding how running on snow and sludge, whilst not feeling unsafe providing I ran slowly round bends, required a considerably greater effort than normal. The cushioning snow and the slippery sludge meant getting any kind of real push off with every step was impossible. After feeling like stopping half-way round due to ankle pain recurring (more on that later) as I passed the flat to start the second lap, I actually ran as much as I could on the road surfaces and just let the oncoming cars get out of my way. If the snow persists then I'd seriously consider training this week on a treadmill. Finding one that doesn't require membership of some sort may be more of a challenge than the runs though!

Here's a couple of pretty pictures taken whilst running this week: 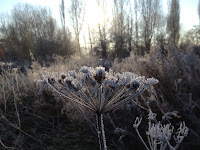 If Beckenham can look this pretty then the Highlands must be stunning. 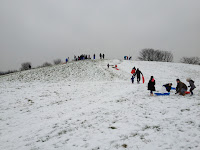 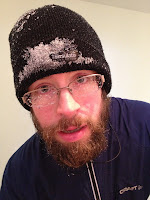 I've never seen so many people at the South Norwood Country Park and... not pretty but wintery - Iain returns this afternoon after his 17-miler

And so to the Boobie Snax. I'm sure the post title had everyone intrigued though I'm sure only a few will be familiar with the reference! Since doing long runs requires a supply of water and nutrition to be carried, I've become used to using a Camelbak that was part of Emily's running gear. I don't like to carry bottles or wear a waist pack as they usually ride up to around my armpits so the Camelbak has been great in solving these issues. The pack I had been using only had just over a litre fluid capacity and I had to remove it whilst going along to get at my GGG nutrition. Donations by the Christmas Fairy allowed me to purchase a new pack with a 2 litre capacity and pockets on the front with a vest-like design called the Marathoner. I have plenty of water for the 20-mile runs I've got to do (eeeeek!) and can stash my GGG on the front where it's easily accessible. I tried it out for the first time yesterday and so far I think it's great. I searched for a long time to find a review of the pack by a woman presuming that the vest front might have some unfortunate chafing effects but I didn't find anything so I've just taken the plunge. Yesterday I was wearing my merino wool Smartwool top, a fleece and my windproof running outer as well so any rubbing would have gone un-noticed. Fingers crossed for the same when the weather gets warmer and I'm wearing less than 3 layers. 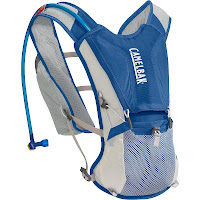 Those of you with keen eyes might notice that I'm not wearing my new trainers with purple laces in the picture. The reason being that I've started to get some pain on the inside of my leg a couple of inches above the ankle on the right side but only after pounding out at least 6-7 miles first. I saw Ryan the physio last Tuesday as if there's something I can do I want to nip it in the bud. We surmised that because the pain is relieved on stopping running (there seem to be no lasting physical symptoms) and coincided with me starting to wear my new trainers a few weeks ago that the trainers might be the cause. He suggested I wear my old trainers for yesterday's long run with the new trainer insoles inside to try and avoid my 10-mile blister and see if the pain recurred. Sadly the insole idea didn't work and I've got a nice blister on my left foot and I did also experience some of the pain but intermittently. As Ryan explained, the neutral shoes I had fitted compared to my old neutral trainers showed some striking differences in both arch support and heel cup stability. For those non-runners, trainers designed for running are made to cover a range of foot striking characteristics, so some people tend to roll over their arch (support needed) and some don't (less support needed). Trainer manufacturers make shoes designed with varying levels of structure in different places to help support the foot depending on how you run. It seems the label 'neutral' does not make them equal and now I'll have to decide what to do next. For the runners reading this, Ryan gave me a web address for an independent assessment review of all the available running shoes grouping them into their various support categories - very useful!

I hope I can find a solution soon because the even bigger miles are a comin'.
Alison