This Post is Brought to You by The Number 'Two' 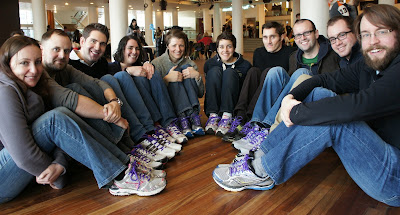 Gym x 2
What a difference a week makes! Iain and I were cheered to hear the rain battering down on our roof on Saturday night washing all the frozen obstacles away. I can now thoroughly recommend The Gym Group for ad-hoc gym sessions since I used their facility at Waterloo on both Tuesday and Thursday last week to avoid both the potential for injury and the extra effort needed when running on snow, ice and slush. I was very disheartened to get the 'computer says no' response from the receptionist at the leisure centre where I swim when I asked if I could use the running machine as a one-off. Apparently I had to have an induction costing £20 and then it would be £8+ per session! Facing the possibility of nearly £40 for 2 runs and the unlikely happening of being able to get a gym induction at a moment's notice it was very refreshing to use The Gym Group for the very reasonable pay-as-you-go sum of £5. You aren't obliged to have an induction either although they are offered. The gym itself was well equipped, not busy and had hot showers - what more could you need! I found running on a treadmill surprisingly difficult not least because of the lack of wind drying the rivers of sweat that needed regular mopping and watching myself running in a mirror for an hour was awful. Being a no-frills gym there's no tv to distract you so I was forced to confront my rather knackered visage and constantly checked my watch to see if it was time to stop. Running outside even round the block beats a treadmill hands down though it did keep me training through the blizzard. On the other hand, runs outside aren't usually disrupted either by fire alarms going off requiring me to go outside in the -1 degrees chill soaking with sweat and not wearing many clothes for 15 minutes while the fire brigade do their thing. Exercising indoors is hazardous too!!!

TEAM! Meet 2
On Saturday ten of our TEAM! members met at the Southbank Centre. It was great to see so many of us together and I took some photos of us in our TEAM! purple laces to pass on to Diabetes UK. I'm due to speak to the charity later this week to see how they can help us fundraise with publicity since we have such a compelling story and represent the largest team of runners in the London Marathon the charity has had all running for the same reason. It was fantastic to hear how everyone is doing in their training with race goals varying from 6 hours to (a truly stunning if he achieves it) 3.5 hours! We're planning some kind of noticeable headgear so that our race-day supporters can spot TEAM! and we've also got some plans for a couple of fundraising events in the next two months... details to follow. Thanks to all of TEAM! who could made it along xx

The Big Two Zero
Thankfully the sun was shining on Sunday when Iain and I attempted our first training run of 20 miles - it turned out we needed every last scrap of help there was to finish the damn thing. I am truly thankful that my new-new trainers, that Run And Become very kindly exchanged for my old-new trainers after I got repeated ankle pain (see my last post), were absolutely fantastic and I finished neither with blisters nor ankle pain. It is certainly not advised to run such a long way wearing brand new trainers. I'd done 6 miles on the treadmill in them without ill effect but had no alternative than to wear them for the long run without the recommended gradual wearing-in. I was impressed again by the care and values of staff at Run And Become as embodied by a lovely lady called Dipika who spent time with me analysing my run in various shoes and really understanding my issues with my old-new shoes. She concluded that the moderately high mileage I've been doing had shown up asymmetry in my running style that could have worked itself out over time had I not been training for a marathon i.e. I was getting pain but if I had been doing lesser mileage the musculature would have a chance to adapt without pain. Since my issues were not the fault of the shop for fitting the shoes incorrectly it was generous of them to exchange them for a pair more like my old trainers (I now have Brooks Glycerin 10 Men's). So the shoes were great, I had three variants of GGG (nana + tbsp peanut butter, nana + heaped tsp chestnut puree, nana + heaped tsp blackcurrant jam) stowed in my Camelbak Marathoner, the sun was shining and all was going swimmingly until mile 16 when it all started to get a bit extremely chuffing difficult. Iain took this photo as I finished after 3 hours and 45 minutes of pounding... 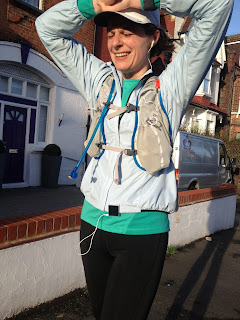 I think my face says it all.

Naturally I'm overwhelmed with joy at the chance of revisiting the 20-Miler another four times at various paces before the marathon according to our training plan but at least I have now gone beyond my 2007 furthest distance run during training and that's a confidence boost in itself.