2013 will be my 3rd London Marathon and if you were to draw a line graph charting quantity and quality of training done in preparation for each of them, it would be a fairly steep line in the upwards direction. 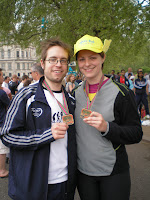 In 2007, Alison and I ran simply because neither of us were runners: we had been down to watch the race first-hand the previous year and witnessing the emotional effort of so many people just inspired us to take up the challenge. Our training started at the end of the summer, and looking back on it now - bizarrely I can still remember some of my first runs - it was woefully inadequate for the task at hand. The race itself was fine up to mile 17/18 and then at Canary Wharf the wheels fell off, accompanied a few miles later by the axles, chassis, shortly followed by the engine, leaving me to walk/jog the remaining 7 miles muttering like a psychotic and you can amuse yourself by working out my splits here. Although my training was based on the London Marathon's own 32-week non-runner to marathoner plan (now 24 weeks), I had missed some runs, did others too fast and made all the mistakes that everyone else does but you believe just won't apply to you.

2010 was an improvement - I knocked 43 minutes from my 2007 time, finishing in 4:05:57, but although my training was better, I continued to make schoolboy errors which cost me a sub-4 finish: Just a month before the race, I discovered that my Nike+, which I was using at the time to pace my training, was slow by 5%. While this may not sound much, that is the difference between training for a 3:59:00 and a 4:11:00 marathon. I ran too far, too near the race (a 26 mile run 3 weeks before) and in the race I was stuck in a slow pen and ran the first three miles way off pace, panicked, and then ran the next 3 miles over a minute faster than pace to get back on track - all very silly.
Of course I still screw up - last year I had to pull out of London when I tore my calf in training because I did not listen to my body, increasing pace and distance too quickly, but as it is not by our triumphs but by our failures that we grow, I am now a slightly wiser - and maybe better - runner.
The one thing I can say with absolute certainty is that it is essential that you give yourself time by establishing your marathon goal and create and commit to your training plan very early doors (realistically 7-8 months before the race).
The programme which Alison and I are following this time round was developed in South Carolina by Bill Pierce and Scott Muir and this year marks the 10th anniversary of their creation of the Furman Institute of Running and Scientific Training (FIRST).
I am not going to review the programme in any great detail here as there have been any number of far more able commentators who have covered it over the years, and of these, few are better qualified than the legendary Amby Burfoot who's excellent and succinct article on the subject from 2005 can be found here for those of you who would like to understand the basics.

Ultimately, if you want to go the whole hog, you will need to buy the book and it is worth noting that the programme's data sets are constantly being tweaked as a result of their ongoing research, so make sure to get the latest edition - currently the 2nd (revised edition) published in April 2012.
I was introduced to the programme back in 2008, but it would be 4 years before I actually did anything with it (sorry Nick - you were a running Soothsayer). For Alison, she took to it because she wanted to do as little running as possible and she loved that cross-training was inherent in the plan as she already swam three times a week.
Once you have the book, nothing could be simpler: you sort out your paces (there is a little bit of maths involved) enter a plan in to your diary and get on with it. The book tells you what day, how fast and how long to run and in theory, although you could probably do this without a GPS watch, I would strongly suggest that you don't. We upload our runs to our Garmins and head out the door - minimal thought needed and that is a big calibre weapon in the battle against the chair/bed-to-front-door training barrier.
Aside from the 2 x cross-training sessions, the programme's three runs a week consist of a Track Repeats session, a Tempo Run and a Long Run and they each serve different training purposes.
My personal bête noire used to be the track repeats which on occasion have reduced me to tears as I somehow scrape through yet another 50 minutes of legs-never-going-fast-enough-screaming-at-trees-and-being-a-little-bit-sick-in-my-mouth horror. Up until two months ago, I was convinced that I was over-clocking it a bit, but then I listened to an edition of the educational and entertaining MarathonTalk podcast in which Martin Yelling confided that he used to get so nervous about his interval sessions because they were so horrendous that he could not sleep. That is when I realised I was probably doing it right.
By the simple expedient that they are the easiest, tempo runs are my 'favourite' (it is all relative), being 5-10 mile runs at a fairly sharpish, but achievable mid-pace and long runs are ok, but only when they are less than 17 miles. Runs over 17 miles are my new nemesis.
Over 17 miles you start to get the unwelcome, unfamiliar and unpleasant sensations which herald the equally unmistakable and indescribable approach of The Wall and the further you go, the worse it gets. The wall is one of those things that you have to experience yourself; no one can describe it to you in any meaningful way because regardless of what someone is telling you, on some level, there will still be a part of your competitive monkey brain tutting and saying 'well I'd run through it'. However, if you would like a glimpse of what happens when you really screw it up and completely bonk then this will certainly help.
After these runs, it usually takes me 24-36 hours before I return to feeling normal again and during the last 7 weeks, we have run 4 x 20 milers and 2 x 18 milers.
I have grown to detest that feeling to such an extent that I would now gladly take the short-sharp agonies of a track repeat session over a 20 mile run any day, but the brutal truth is that come race day, the knowledge that you have absolutely paid your dues with miles is one of the strongest antidotes there is to fatigue. Because you have run your plan, because you know that you have put in every mile you have been asked to, because you have earned your entitlement to not only finish but compete, you are possessing of a knowledge that bolsters a belief that has the power of 100 energy gels. Grrrr.
Happy planning, happy training, happy trails.